Renowned American playwright and novelist, Thornton Wilder once said, “I regard the theatre as the greatest of all art forms, the most immediate way in which a human being can share with another the sense of what it is to be a human being.”

This seemed to be the thought behind The Playmakers’ latest production, Achhe Din. But under its veil of relatable commentary on contemporary politics lies the generic and parochial ideologies falling into the traps that often stale political satires run themselves into.

It was a compilation of five short plays. The first one was about demonetization highlighting how government decisions affect a regular middle-class family. However, the way it was shown was a bit too convenient to be believable.

The second play was a tad problematic. At its heart, it was an attempt to begin a conversation about domestic abuse, but it ended up being a gory, overtly exaggerated, and stereotypical story of a Muslim butcher who chops his wife up, while also superficially appearing to touch on the issue of triple talaq.

The third story centers around a talented salesman who can sell anything from gaudy salwar suits to his kidney but is out of touch with the present English-speaking generation. The plot rapidly shifts to the issue of organ smuggling leaving the audience confused as to its stance. This generic neutrality and the attempt to simultaneously address several social issues recur throughout the play.

The fourth story, the most direct and best of the lot, is called Sabse Bada Khiladi. The title character can be mistaken to be the underappreciated sportsman we are introduced to in the first scene. The first half of the story is a critique of the recent incident of moral policing in public transport in Kolkata. The narrative soon focuses on two local policemen. The power dynamic between the duo is clearly visible with the junior policeman waiting upon the senior in a manner which becomes more and more forced than comical. In a bewildering turn of events the ensuing conflict results in the superintendent shooting the sportsman and easily getting away with it because he is the “sabse bada khiladi” in the “national sport” of corruption.

The fifth story, Daag Achche Hai, would not look out of place in a Hindi TV serial. It follows the same old trajectory of a soldier fighting at the border and his sad, quiet wife eagerly awaiting his return. It shouldn’t come as a surprise that the soldier is killed at the end and the wife is left with only a shirt, covered with “daags”. There’s a subplot, involving a school student who advocates independence of Kashmir and how it costs him the head boy’s position. This much more interesting storyline could have been looked into but it stuttered to fulfill its own potential. 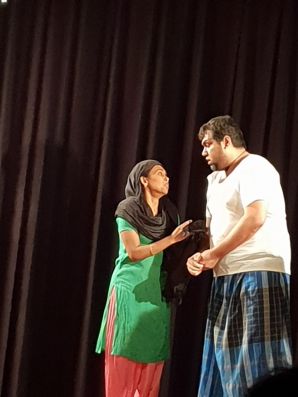 The cramped stage of Kalakunj provides little room to experiment. The first play is unable to carry out optimal utilization of the space. The sound is loud and distracting at times. The scene transitions could have been smoother but that can be attributed to the overly elaborate set designs.

A mention must be made of two actors who stand out. The character of the abused maid in the second play is well enacted. The nuances of this uneducated, exploited woman who tries to protect the same husband who abuses her everyday are successfully captured. The other is the character of the male teacher in the final play. He is a true representation of today’s Indian middle class– trying to remain apolitical while complaining about everything under the sun but ignoring larger issues as long as they aren’t affected. None of which changes the fact that they’re always good at heart.

Acche Din was a bit below the level of expectations. What starts out to be a political satire soon confuses the audience with generic tropes and stereotypes. But, there is always a window for improvement. As they say, theatre is an art- it’s perfection grows with each subsequent rendering.